I recently acquired the Samson C01U USB condenser microphone for better quality voice-overs on the sleep-inducing screencasts I sometimes make. It took some fiddling to get it setup correctly on Ubuntu 12.04 with the default ALSA drivers and PulseAudio sound system, so I’ve documented the steps here on the chance that it might help some other Ubuntu / Linux user. 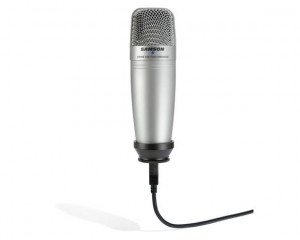 It comes with a USB cable, pouch and usable tripod stand. One can accessorize with the Samson PS01 pop-filter (have it), and even with a spider shockmount (don’t have it yet, I like people to hear me typing when I make screencasts). Importantly, the quality of the recorded audio is miles better than any headset, if you can get the levels setup correctly.

It turns out that the microphone has a stereo amplifier chip. Both channels are exposed to the computer it’s connected to, as left and right. However, the two amplifiers have been cascaded for more gain. The right channel is the intermediate audio, i.e. after the first amplifier, and should not be used. The left channel is the final output that should be used. Furthermore, both the gains can be separately adjusted, and this is the reason my recordings were initially far too soft.

To adjust the gains of the built-in amplifiers, you have to use the alsamixer application, which you can start up from a terminal window. Right after startup, it will probably look something like this: 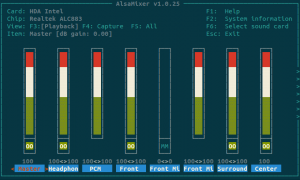 It will probably show the channels available on your default sound card. Press F6, then select your Samson, then press F4 to select the capture channels. You should now see this: 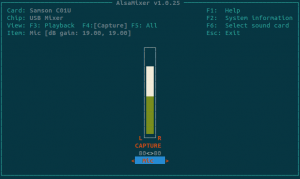 I’m a little Samson microphone, and I’m all alone!

Here you can adjust the gains of the right (pre-amplifier) and left (main amplifier) separately. This is completely separate from the gain that you can set in the Ubuntu / Gnome sound settings: 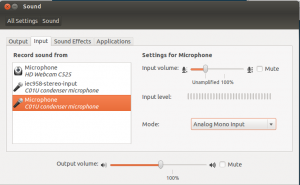 I’ve found that by setting the gain of both of the built-in microphone amplifiers to about 19 dB with alsamixer, I can keep the (probably software) gain in Ubuntu / Gnome sound settings at “Unamplified”. Note also that I’ve selected the “Analog Mono Input” mode. I’ve tried with different gain settings for left and right, as some permutations should in theory have less noise than others for the same total gain, but have not yet found anything that resulted in a difference I could hear.

So that’s it kids. Let me know in the comments if you have any questions, if this howto might have helped you or you have other ideas about the perfect left/right gain settings!

Recently, Google Hangout users started reporting that the volume of my voice was too low. This was strange, because the recordings I made with Sound Recorder were perfect. After some frustrating minutes, I discovered that the Pulse per-application volume for Google Chrome (which I use for Hangouts) had been adjusted. This means that there’s a third configuration that you should check when adjusting the levels of your C01U (or any other microphone), and that’s on the “recording” tab of the Pulse Audio Volume Control (pavucontrol). See this screencast (and check my description) for more details: