I recently needed a new mobile development workstation. My main requirements were that it should have at least a Full HD (1920×1080) IPS (in-plane switching) screen and a good keyboard, and that it should be able to run Linux, preferably Ubuntu, as its primary operating system.

After experimenting with a screenshot of my 1920×1080 desktop workstation running IntelliJ Idea 12 (my IDE of choice) on an Asus UX31A with 13″ Full HD IPS screen,  I realised that I would have to go with a larger screen. The Asus UX52VS with 15.6″ IPS also looked like a good bet, but there were no reviews available yet, it was not clear whether the 4GB RAM and hybrid HDD (large spindle drive, 24GB SSD cache) would be easily upgradable to full SSD, and the  €1200 price tag was reason for more consideration.

I finally stumbled upon this review of the Acer V3 571G with Full HD IPS, which was mostly quite surprised that such a laptop with such a screen could be sold for entry-level prices. I subsequently purchased model number V3-571G-73638G75Maii, with Full HD IPS (this is the LP156WF4-SPB1 LED IPS matte panel by LG Philips ), Intel i7 36732QM (a real mobile quad-core; many mobile i7s are dual core), NVIDIA GeForce 710m with 2GB VRAM (Optimus graphics switching), 8GB RAM, 750G HDD, all for €799. I also purchased an Intel 520 240G SSD, a really fast SSD with built-in hardware encryption that would replace the main HDD, for €200.

Photo courtesy of notebookcheck. Do see their great review (linked in the post).

My first impression of the laptop was that in reality it does not look quite as cheap as the photos might make one believe. I was pleasantly surprised when I set out to replace the HDD with the Intel SSD. After removing two screws on the underside, a panel can be removed behind which the hard drive and RAM can be easily upgraded: 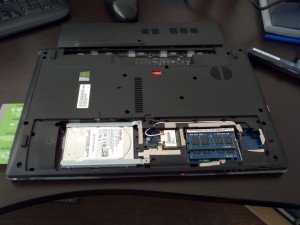 Upgrading the hard drive and ram has been made straight-forward, as it should be.

After the SSD upgrade, installing Ubuntu 12.04.2 went mostly without a hitch. 12.04.2 comes with the LTSEnablementStack, backports of the Quantal kernel (3.5) and the new X stack to support more hardware. This caused some dependency problems when I installed bumblebee (Linux support for NVIDIA Optimus graphics switching), but this problem was almost immediately fixed by the ubuntu-x-swat team when I reported it on #freenode, so you should be fine. Just in case you need a reminder, bumblebee is installed and configured as follows:

If you want to run something on the NVIDIA, just do “primusrun command” or “optirun command”, where the former is preferred due to performance.

Other than that, make sure you have GRUB_CMDLINE_LINUX_DEFAULT=”apci_backlight=vendor acpi_osi=” in your /etc/default/grub (run update-grub and reboot after you change this) to get the screen brightness hotkeys working. Unfortunately, the brightness notifier itself does not work, but this is not a problem.

After a few mails to-and-fro with Acer tech support (they do respond, mostly) and two nights of experiments, I can now confirm that the HDD password implementation on the laptop is worth less than nothing. In the spirit of full disclosure, this is the Insyde H2O BIOS implementation of HDD  passwords. This BIOS is used on many modern laptops besides Acer.

For many of the current self-encrypting drives, BIOS support of the ATA security feature mode set is important. It should be possible to set both master and user passwords, and, more importantly, the BIOS should ask for this password at bootup, at which point it should pass the user-entered password, unchanged, to the hard drive as ATA commands. Setting the HDD password on the Acer does none of the above. Instead, it sets a fixed password that has nothing to do with the user password. At bootup, it asks for a HDD password. However, if you enter this incorrectly 3 times, you get a hash code. This hash code can be used with a simple Python script to generate a master unlock password with which the HDD can be trivially unlocked. I confirmed experimentally that this works.

I also experimented with setting the ATA security user password to a known value using hdparm from a Linux boot USB. The Insyde H2O BIOS unfortunately does not fall back to sane behaviour.

To summarise: The Acer BIOS can’t be used to manage ATA security. Because it is important that my SSD is fully encrypted, I now boot the laptop with a USB stick, unlock with the real ATA user password using hdparm, and then warm-boot back into the SSD. I perceive this as a relatively small price to pay for reasonable and super fast data security (my Intel does 500MB+ read and write, all with AES-128 encryption). Remember that software encryption has a severe performance and durability impact on all SSDs, especially those using compressing controllers such as the Sandforce, but also SSDs that employ no compression at all. AES-NI is really not the issue here, it has to do with the performance and durability optimizations modern SSD controllers do.

The matte Full HD IPS screen on this laptop is a pleasure to use. I find the chiclet keyboard above average for programming. It’s not as rigid as the keyboard on my Samsung NP300V3a, but it’s entirely acceptable. The combination of an Ivy Bridge i7 3632QM quad core, an Intel 520 SSD and 8GB of 1600MHz DDR3 RAM makes for a laptop that feels super responsive. Taken together with the solid Ubuntu support and the €799 + €200 price tag, and in spite of lack of ATA security support in the BIOS, I can only highly recommend this machine to any developer looking for a powerful Linux laptop on a budget.