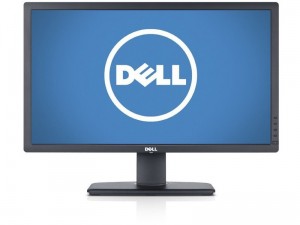 The monitor has been optimised to show the Dell logo. (image from the Engadget review I linked to above.)

Part of this tweaking is making use of reduced blanking, an optimization that can be done on LCD panels where there’s no electron beam (as is the case in CRTs) that needs time to be repositioned. In short, we can squeeze out more resolution and refresh from the same bandwidth.

NotebookCheck has a wealth of information on tweaking these timings. Unfortunately, the configuration they supply for 2560×1440 at 55Hz only caused flickering on my setup.

Fortunately, Linus Torvalds (just some guy who seems to know quite a bit about Linux 😉 documented on Google+ his adventures getting such a monitor going under Linux, albeit with a 30Hz refresh rate. Fortunately, a commenter named Tim Small posted the timings he had generated with a hacked version of cvt!

Based on his timings, I could get my monitor going stably at 2560×1440 at 50Hz. Enter the following in a terminal:

When you enter after the second line, the monitor should switch to the 2560×1440 mode. After having done this, 2560×1440 appears as a selectable mode in the Ubuntu Displays app.