We’ve all been there: You’re used to the terminal on Linux or OSX, and then for some or other reason you need to work on Windows and you’re confronted with the half-baked monstrosity that is cmd.exe: 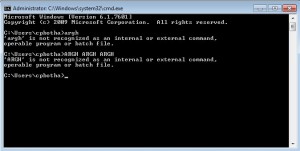 It’s 2011 and this is Windows 7: Why does the console still make me want to gnaw off my fingers?

To summarise: You can only resize the window vertically (so you’re always restricted to 80 characters width which is just idiotic on modern widescreen displays), copy and paste is so painful that you’ll wish that they’d rather just not bothered with it in the first place and the cmd.exe interpreter itself is primitive when compared with any modern unix shell.

Enter the two-pronged solution of Console2 and Git bash! Console2 is a console that solves the UI problems (resizing! copy and paste! terminal transparency! tabs!) and you can use it together with any combination of command line interpreters, such as for example the existing cmd.exe, bash or anything else.

Here’s my setup, configured with Git bash (you get this for free with the Windows git installer, for this purpose it’s better than Cygwin as it’s a touch closer to Windows) as well as plain old cmd.exe. To configure a Git bash tab, set Shell to “C:\Windows\SysWOW64\cmd.exe /c “”C:\Program Files (x86)\Git\bin\sh.exe” –login -i” (including all quotes) and Startup dir to %HOMEDRIVE%%HOMEPATH%. I’ve also configured Ctrl-Alt-T to invoke Console2. With shift-mouse-drag I can select text (nice editor select, not cmd.exe block select, ptooey!), and I’ve set Ctrl-Shift-C and Ctrl-Shift-V to copy and paste so it’s like the Gnome terminal on Linux. Behold: 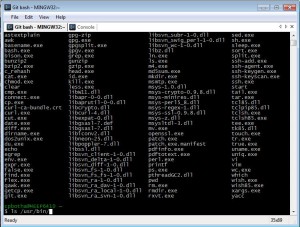 Console2 makes the pain go away.

My Windows experience is a lot more bearable now, perhaps even slightly pleasant! Did I just say that?!