This review differs from other HTC Desire Z reviews because I’ve actually been using this phone as my only smartphone quite intensively, and because I’m writing up, in great depth, my iopinion as a gadget-toting ex-Linux-zealot computer science nerd. Take that engadget!

As many of you know, I was completely in love with my previous smartphone. Not surprising, seeing as the Nokia e71 is perfect, at least hardware-wise. However, partly due to Symbian (Nokia’s operating system) really dragging its heels (Nokia, does your mobile OS really have to feel like it teleported in from 1970?) and partly due to Android (Google’s mobile operating system) doing the exact opposite, I’d been not-so-patiently waiting for the right Android-running telephone to come along so I could start drinking the Google Kool-Aid.

Enter the HTC Desire Z, known in the US as the T-Mobile G2, a micro-laptop with built-in mobile phone, or a flashlight with built-in laptop and phoning function, whichever you prefer: 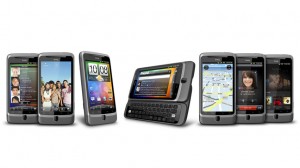 After having read a gazillion mobile phone reviews and months of intensive pondering on what physical keyboard-toting smartphone I would get after two years with my E71, I had narrowed it down to a Blackberry Bold 9780 or the HTC Desire Z. Blackberry lock-in (if you don’t pay RIM their monthly protection money, half of your telephone stops working) together with my penchant for all things Google led to the purchase of the HTC Desire Z from the smartphoneshop in Rotterdam (highly recommended: It’s a web shop, but I just popped in there on a Sunday to get the phone and sort my contract issues) along with a 1 year T-Mobile iPlan 150 contract (150 minutes, 150 texts and unlimited 2 Mbit/s internet).

The thing has now actually survived three weeks in my hands being super-intensively futzed around with, so it’s finally time to talk honestly about our experiences together.

Coming from the Blackberry-style Nokia E71 keyboard, a finely tuned mechanism for high-power text entry, it took a while to get used to the Desire Z’s slide-out keyboard. However, I’m now completely convinced that the keyboard is absolutely worth the extra 40 or 50 grams. Many have complained, but the mechanism is beautiful: It slides in and out with a satisfying PLOK. There are no springs or spring-loading in sight, as this business all elegantly gravity-powered. Yes, if you’d try to lie on your back holding it in front of your face, gravity starts working differently and the thing will fall open. My advice: Pick some other activity for performing whilst lying on your back. The keys themselves are nicely separated. Perhaps they could have been a tad less stiff. Importantly, I find that clipped nails greatly enhance my typing experience. To be quite honest, it’s a fine keyboard, but the still wins in this regard.

The phone has a great feel: With its 180 grams and subtle brushed metal finishing, it exudes quality when picked up. However, if you’re a smaller person, you might want to try it first before making the jump. I find the weight and form factor just perfect, but that’s of course all relative. I carry the thing, without a cover of any kind, in my trouser pocket. (Oh who am I kidding, I never wear trousers. They’re jeans. By the way, did you know that someone has a patent on reinforced trouser pockets?)

Finally, the software integration on this telephone is beautiful. So with Android 2.2.1 at the time of writing, and the HTC Sense layer, you receive a mail or check your Friend Stream (twitter, facebook and whatnot), tap on an attachment or link and the relevant application opens. New apps can register as handlers, so after you’ve for example installed Dropbox, long tapping on some files will give you the choice of syncing them with your Dropbox account, and so on. Because this is more a micro-laptop than a telephone, I definitely feel far less constrained when having to work on it than was the case on my E71: I can edit documents, SSH to places, review presentations use all forms of webapps, without anyone having to know that I was trapped on a train or some other odd place for a few hours. Also compared to the Apple 3GS with iOS 4.x, the Desire Z blows it out of the water in this respect, due to both Android and the keyboard of course.

Finally, and this is a good point of any Android device, the apps and the Android Market integration. Further down I will briefly discuss my favourite apps at the moment. For now it suffices to say that there are a gazillion apps, all installable (and the non-free ones purchasable) with a single tap. With a certain amount of searching, you invariably find that one app that you believe will help you be more effective / productive / happy / successful in life, at the very least for the subsequent five minutes. In other words, your toy is able to acquire completely new functions, not always equally useful, at the tap of a button.

The 1300 mAh hour battery is a definitely weak point of this telephone. After the initial conditioning discharge-charge cycles, the battery did indeed go from utterly crappy to merely disappointing. It now lasts from about 8:30 in the morning till about midnight and on days when I spend more time than usual futzing with the thing, the hungry beast starts complaining at about 20:00 that I should really consider giving it something to eat. This is in spite of the fact that I mostly explicitly switch off the wireless (I know it times out by itself), keep the GPS switched off, switch off automatic syncing quite often and keep the screen brightness on automatic. If the Battery Usage app can be believed, the screen is the biggest culprit. Usually it consumes 60% or more of the power budget. According to CurrentWidget, the phone eats about 30mA in standby, about 140 mA when I’ve just switched on the screen and about 300 mA when I’m just browsing the interwebs.

I also do have some small gripes with the software:

Even worse than the battery is the dismally performing optical trackpad. If you’ve ever played with one of the new Blackberrys, you know that an optical trackpad can work just perfectly, almost seeming to read your intentions rather than your finger motion. The trackpad on the Desire Z either reacts very slowly, i.e. vigorous finger motion results in very little cursor motion, or not at all, sometimes requiring 2 or even 3 swipes before the cursor does anything at all. What’s really frustrating, is that if I swipe with a piece of cloth (read “t-shirt”) over my finger, the thing works exactly like it should. Furthermore, swipes over the trackpad often end up on the “menu” or “back” touch keys, resulting in completely unintended consequences.

Now on a touch screen phone, and the Desire Z has a really great touch screen, the trackpad is less relevant, but why did HTC go to the trouble of integrating it there?! Also, why did they pick the crappiest trackpad they could find when the rest of the phone (ok, forget the battery for a moment) is constructed from top notch components? The trackpad could have been a really useful input device, allowing for fine cursor positioning for example.

Let me calm down for a while, and conclude this section with the following disclaimer: In the meantime, I’ve played with the trackpads on two different HTC Desire Zs. One of them was more or less the same as mine, the other seemed to be much better. I’ve also experimented with fingers belonging to different users than myself, that doesn’t seem to be a factor. Whatever the case may be, the trackpad on MY telephone is almost useless, but I’m going to test on more Desire Zs to establish whether mine is a dud, or it was a design error on HTC’s part. smartphoneshop has offered to take my phone back, but I have great difficulties parting with it for more than a few minutes, and it’s not sure whether a repair will even agree that something is wrong with the phone.

You can see all of the apps I currently have on my telephone by going to my AppBrain user page. I’m only going to mention my favourite ones in the  following list:

In spite of its flaws, namely the disappointing battery life and the hardly functional trackpad, the HTC Desire Z is the information age equivalent of a Swiss Army knife. It has everything you need to function, no, to excel as a data-wrangling nerd. You can go on the road, confident that you can wrestle to the ground anything thrown at you via the internet.  If your battery survives long enough, the built-in flashlight app (the camera flash is very bright) could even help you solve some real-world problems after dark. Accentuating the nature of this power-phone, a number of my more nerdily-inclined but socially adept friends and colleagues have acquired the Desire Z or are at this very moment lusting after it. If you in fact need a micro-laptop with phoning function and you can live with the charge-me-every-day battery and you don’t mind the trackpad, this is just the device for you.

If you have questions or suggestions, please leave me a comment below. I’d like to update and refine this review as new information comes in.